Finals will be played on Sunday 7th February 2021 at Deanes Indoor Tennis Centre.

The draws for all events can be viewed on the LTA Tournament Software.

Unfortunately due to the Coronavirus, the summer tournaments were cancelled.

Please click here to see the draws and results of matches played for all events.

Unfortunately due to the Coronavirus, the summer tournaments were cancelled.

Due to the Coronavirus, Westcliff Lawn are not currently hosting any LTA events. 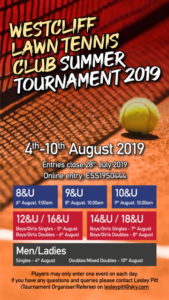 A considerable number of club members and family once again made the journey to Cornwall for the 70th Penzance Open in 2019.  All the draws and results can be viewed here.  Success for club members as follows:

Unfortunately the 2020 Penzance Open was cancelled so Steve will be refereeing his 25th Penzance Open in 2021.  The dates are Sunday 25th July to Saturday 31st July 2021.

Please see Penzance Tennis Club website for further information about the club and the tournament, or ask Steve, Hazel or Gill for details. 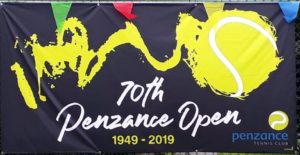 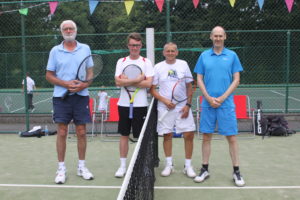